Many beer-lovers have, under the romantic influence of a well-crafted boutique beer, indulged in thoughts of trying their hand at brewing.  For Karen and Dave Golding, the influence of countryside pubs and microbreweries they visited while travelling across Germany, Belgium and England in the early 1990s was so strong that they bought a fertile plot of land in Red Hill to grow hops and set up a full-scale brew house.

A new menu of beer friendly food is now operating, full menu available for lunch 12-4pm, with snacks until closing. 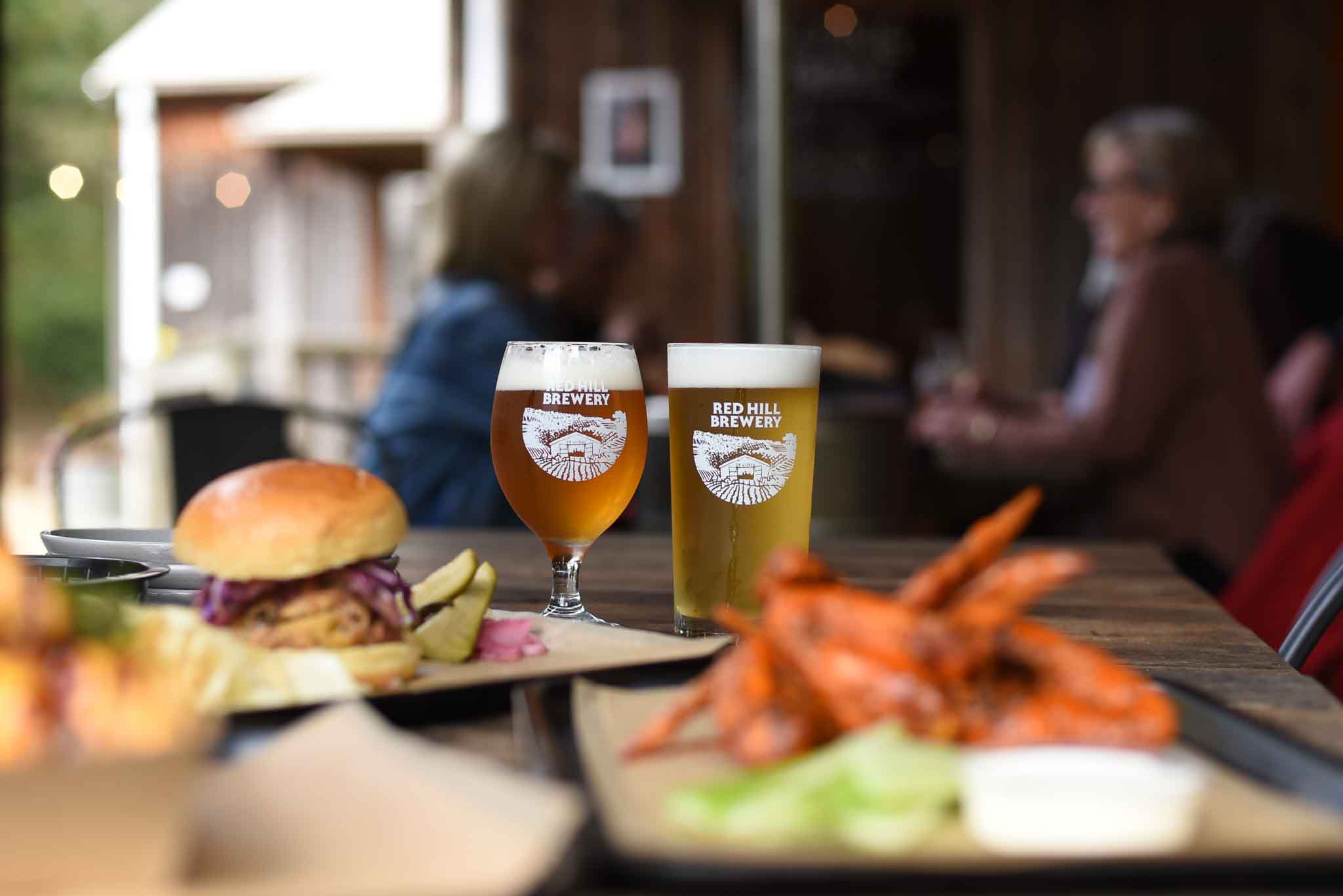 This was well before the explosion of Australian boutique beers, at a time when local beer was mostly just a generic cold drink for a ‘hard earned thirst’, as opposed to the wide variety of flavours savoured across Europe.

The peninsula offered a lifestyle change the couple had been looking for. They left Melbourne in the late 90’s, soon leaving behind jobs in advertising and website design, and setting about building their new life. Dave undertook a short course in brewing in Ballarat, while, onsite they built the brew house, taught themselves the art of growing hops and renovated the property.

The finished product was a microbrewery complimented by cellar door and café that served food influenced by the beer-loving European countries that had inspired them. Red Hill Brewery opened its doors in 2004, around the same time as Karen and Dave started a family.  Sadly for the many locals and visitors to the peninsula who visited this popular microbrewery, in mid-2012 Karen and Dave decided to close the bar, café and cellar door, as circumstances changed and the business evolved.  The good news is that they have closed that side of the business in order to grow and focus on brewing more of their award-winning beer, with new styles, and making it available more widely.  After all, brewing great beer is what the pair is most enthusiastic about.

At the top of the list is the ever popular Golden Ale, a two-time bronze and two-time silver winner at the Australian International Beer Awards. Along with the Wheat Beer and Scotch Ale, it is one of the year-round products.  As for the bevy of other beers, which have won a slab of awards, it’s an ever-changing rotation of specialty seasonal brews, with a new one available almost every month.  In summer it’s the Christmas Ale and Belgium Blonde, followed by the Hop Harvest Ale to celebrate the autumn harvest. Things get heavier in winter with dark beers including the Imperial Stout and then Wiezenbock as the hops return, heralding spring and the Bohemian Pilsner, which has now earnt a place on the permanent roster.

Despite the closure of the cellar door, there are still opportunities to visit the brewery. Karen and Dave are keen to maintain a connection with the community by giving them access to the heart of the business (subscribe to the brewery’s email list to keep up to date on open days and other events).  Autumn is a particularly active time, with the annual Hop Harvest in March, when they invite the public to come and pick hops, enjoy lunch and enjoy a brewery fresh beer or two, just to experience the process at both ends.

Karen says her favourite of the beers depends on the weather, season, even the time of day. They both love the variety, but are quite partial to the pilsner.  Since the closure of the café, which Karen had co-ordinated, she has taken on responsibility for sales, distribution and marketing as the brand expands its reach – even possibly finding its way to Sydney shelves soon – while Dave looks after the production from beginning to end, and everything in the brew house, including daily cleaning and maintenance of the expensive machinery.

As much as the beer, they enjoy the lifestyle they’ve established in Red Hill with their young family, having set up a business they are enthusiastic about in an area with real community spirit and great location. As demanding as the business can be, they regularly visit the beach and find that, if you can get the balance right, it is the ideal place for the active, connected, family lifestyle the couple want.  So they may be a little less visible to the public these days, but you can expect to see a lot more of this popular, great quality beer around town.

Did you know that you can now stay in the Brewers Cottage set in the grounds of the brewery?

The Brewer’s Cottage is a fully self contained, comfortably appointed three bedroom holiday house in the grounds of the Red Hill Brewery, the Peninsula’s original microbrewery. Featuring a fabulous designer kitchen with all the culinary tools necessary to delight the foodie, you will be perfectly equipped to prepare and enjoy the produce of the Mornington Peninsula in your own kitchen with the superb craft beers from the Brewery. Relax by the open fire, gather around the gourmet kitchen or enjoy a bbq and great brews outside amongst the beautiful rural setting, whilst the kids play in the cubby, boat and trampoline.

If you seek a benchmark cellar door experience wit