Architect Adrian Bonomi grew up in a genuine family home. Along with his parents and younger brother, he shared the house with his artist grandmother, who designed it, and grandfather, who built it.

“It was a big, white, spack rendered, flat-ceiling, flat-roof house, which, for the 1950s was a bit out there when everything else was just brick veneer bungalows with pitched tile roofs.” It was in this environment, surrounded by creative and practical people – including his mother, also an architect – that Adrian started dreaming about architecture and building.

Adrian began his extensive architectural studies at the Sydney Institute of Technology, completing a Diploma in Architectural Technology and then into the University of New South Wales to complete his degree in architecture with honours. Adrian spent three invaluable years of work under the talented and renowned Sydney architect and professor Neville Gruzman, then moving on to establish himself as an innovative architect in London and Melbourne before settling on the Mornington Peninsula in Autumn 2013. Other than offering more places for him to windsurf, living here allows Adrian to focus on the elements of his work that mean the most to him. “It’s quite different, and it actually suits where I want to take my residential architecture,” he says, which is more about “great design and working with craftspeople and builders.”

Designing for rural land on the Peninsula comes with its own challenges and planning requirements, but Adrian says there is generally greater freedom than metropolitan areas where houses need to fit in with neighbouring dwellings. Adrian has found an inspiring dynamic in the regional character that he aims to reflect in his work. “I think the peninsula is a really unique mix of rural environment, natural environment, people and culture that you don’t find in many places in Victoria.” “I think it’s an incredible area for an architect to be based.” From the beaches to the vineyards to the artist’s hangouts and craftspeople, he describes it as a melting pot that exists within a wonderfully dramatic landscape. All of these factors feed into the way Adrian thinks about the buildings and spaces he designs.

Despite his urban experience, Adrian is conscious not to bring a city aesthetic or idea of what a building should be to his local work. He is averse to the idea of building houses here that are essentially imported in design and construction, from Melbourne or further afield, particularly on prominent sites where they sometimes stick out like a sore thumb. On the contrary, Adrian feels as though the move to the Peninsula is bringing a new, richer look to his work. It has been a big move, but with his focus on design and buildings that complement the surrounding environment, he sees great potential and a lot of people who are keen to invest in good architecture in the region. Adrian has been busily building local connections to ensure in every way possible that each project is a localised project. This is also part of having a focus on sustainable design, which, for Adrian, is “completely interwoven with the whole design philosophy.” “It makes sense when you live in a rural area to be as self-sustainable as you can be,” he says. 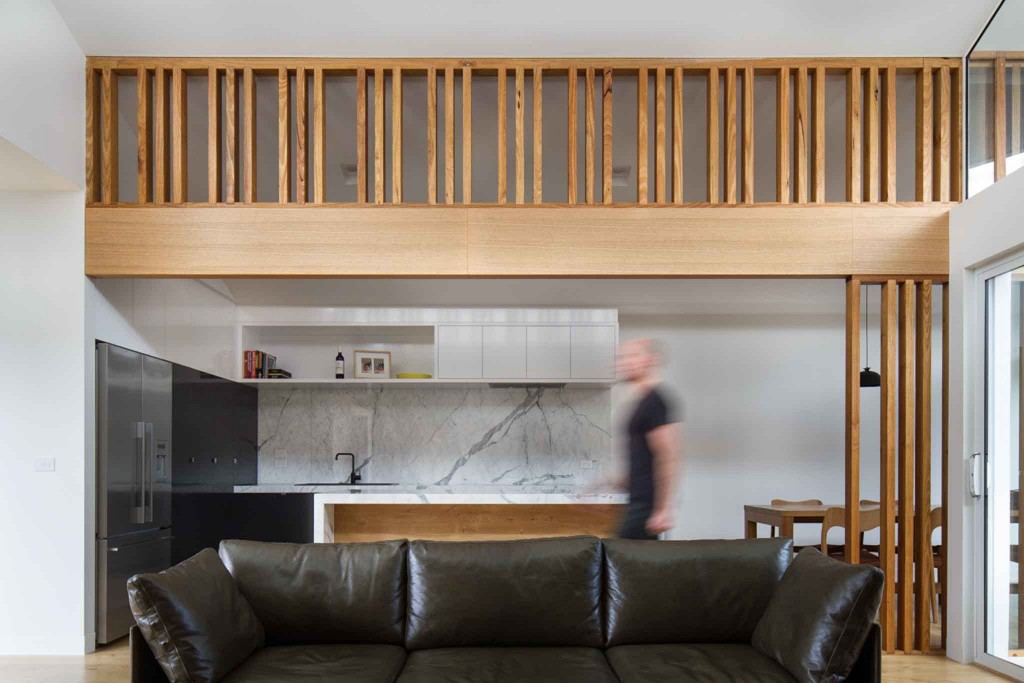 Retrospective 1: Sandwiched between small single storey weatherboard cottages, the Brunswick House design departs from some apparently sacrosanct norms in current residential architectural practice. While the design adopts other niceties such as the orderly transition from public to private space and the illusion of grander space that belies the site’s nine metre frontage, to anyone versed in the fundamentals of orientation and solar control certain questions immediately come to mind. Why not a north facing living room? No that’s where the hallway is. Does it have a formal front door? No it’s a gate to a courtyard. 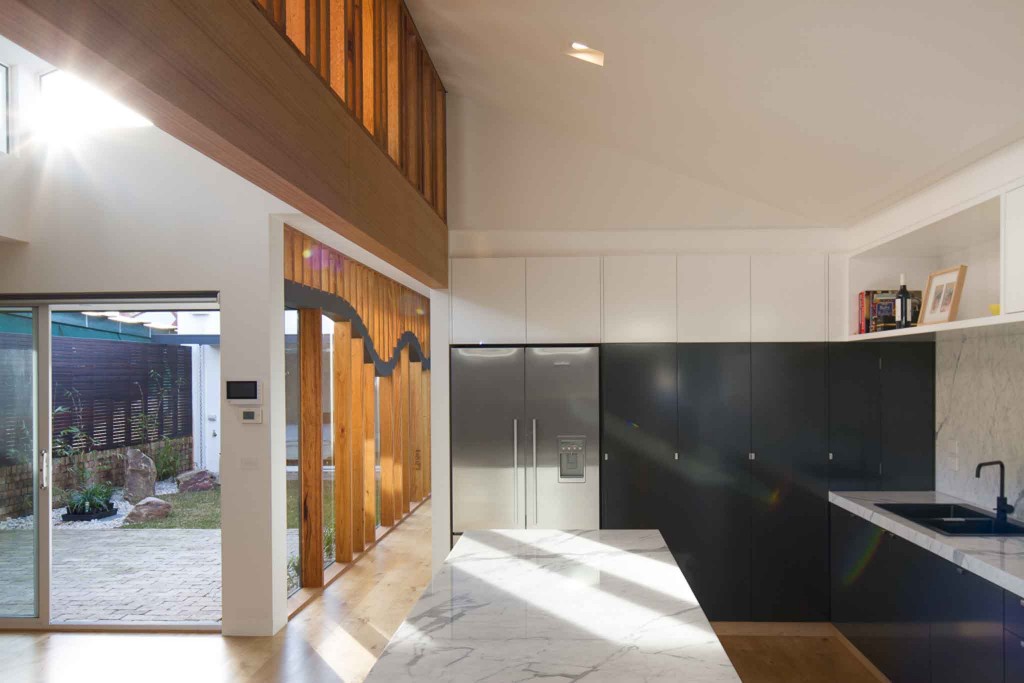 Retrospective 2: To move from the street to an intriguing, verdant and cool garden space where the owner may one day embrace visitors, is the first of several small delights. 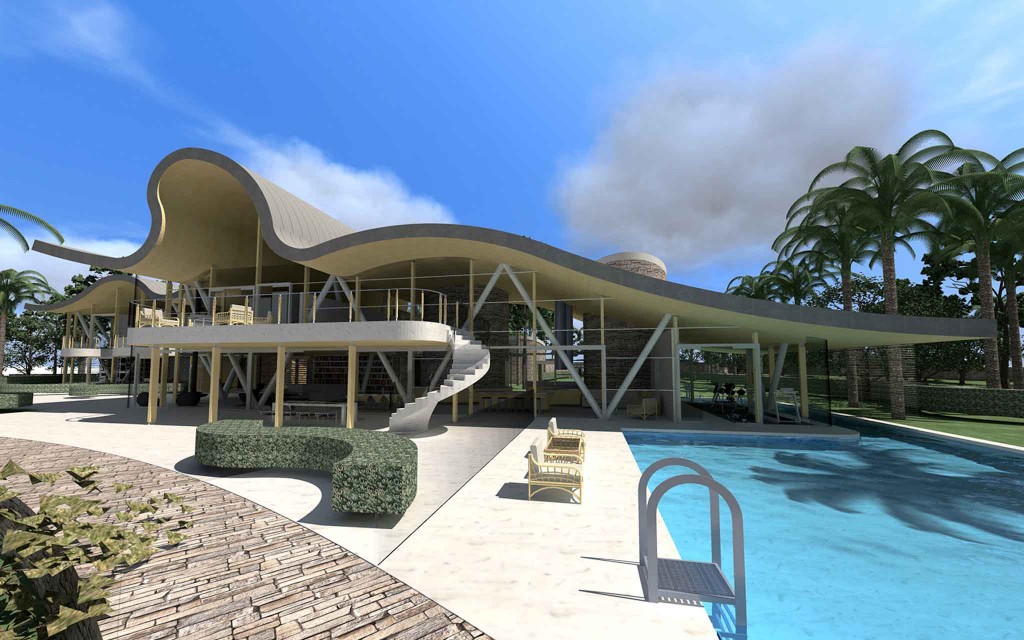 Retrospective 3: The scale, complexity and ambition of the client’s brief, the waterfront position, the exceptional climate, vulnerability to hurricanes and pure architectural experimentation led Adrian and his team to propose this fluid design. A strongly expressed waveform roof, facades of glass, expressed steel superstructure, marble and timber finishes come together in a residence that resonated with the tropical marine environment setting. 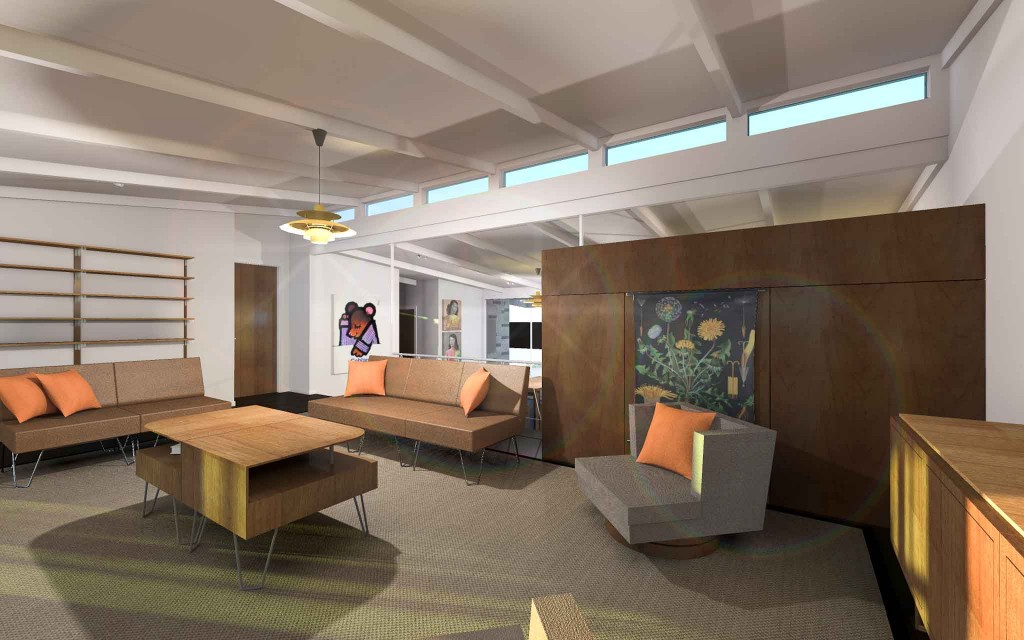 Retrospective 4: A complete transformation of a 1960’s Australian modernist house, set on top of a Beaumaris sand dune. The design draws on the original materials palette and reinforces the attractive proportions and original volumes and facades. 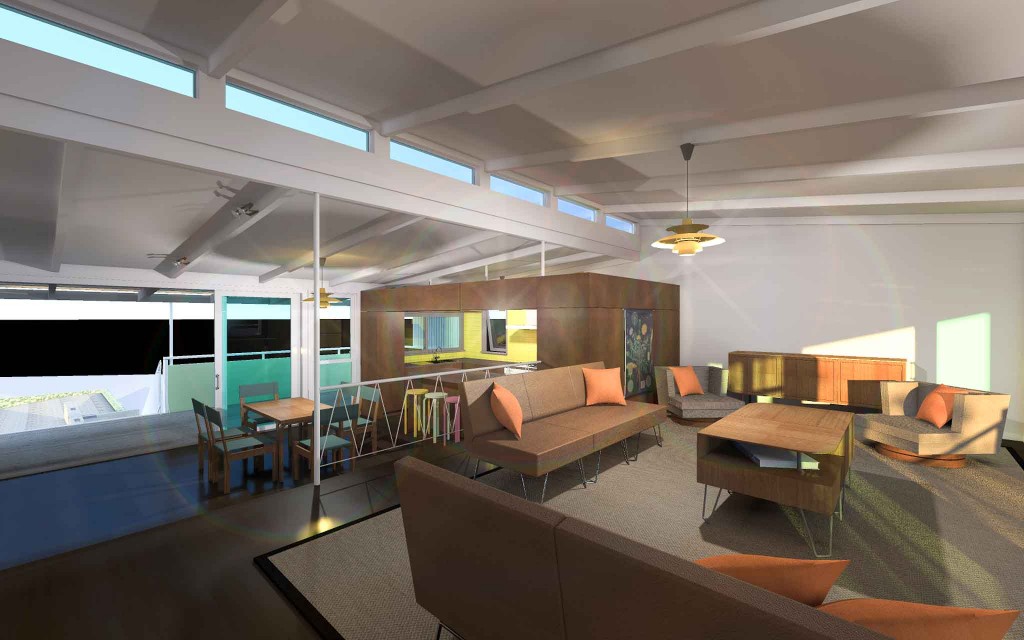 Retrospective 5: The building is also more closely linked with the indigenous garden rather than floating almost completely unconnected – a typical and erroneous characteristic of many houses of this period.

Retrospective 6: Purchased in original 1950’s condition, this three bedroom home unit was transformed into a modern, light-filled residence that wraps around a north-east facing, tranquil zen-like courtyard garden. The efficient original plan required only minor alterations to make this a great place to live. 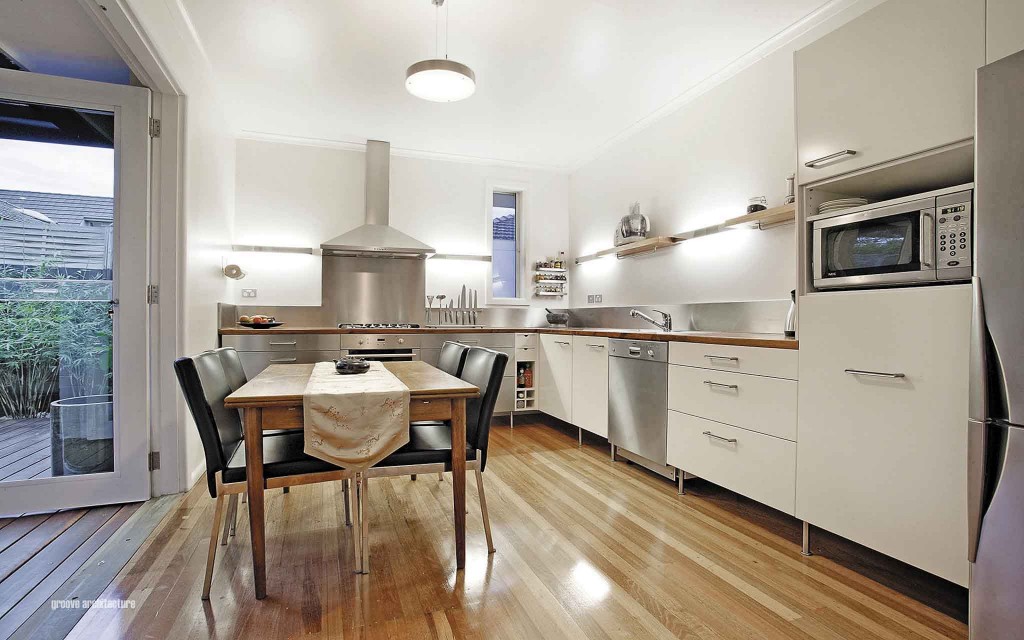 Retrospective 7: The illusion of a larger space is created by careful manipulation of the outdoor spaces, glazing, surface treatments and flush door thresholds. 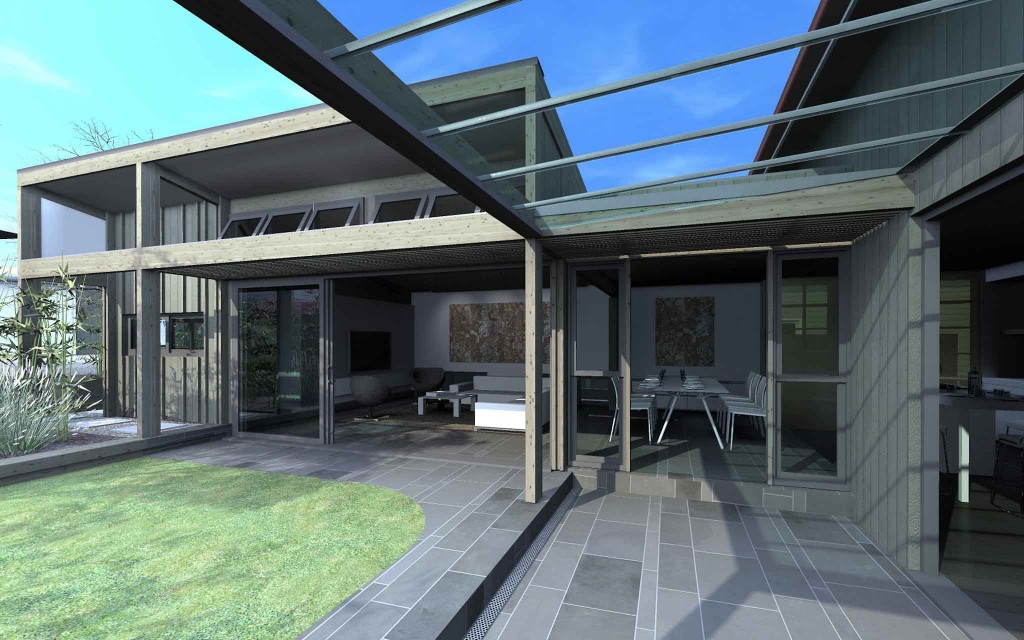 Retrospective 8: This alteration and addition to a well proportioned Edwardian house is modest in size but ambitious in it’s programme. 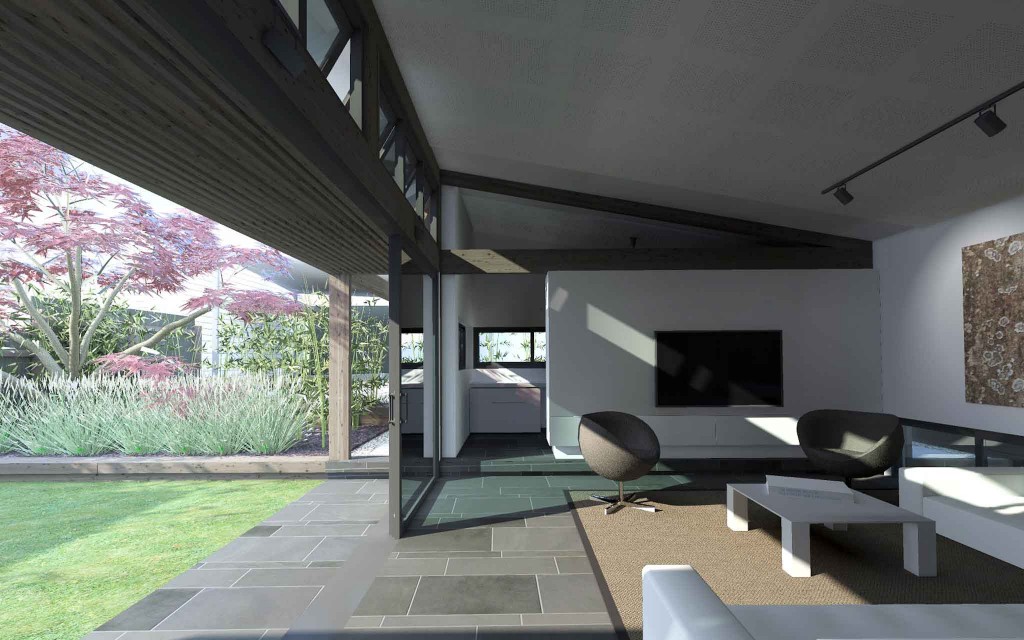 Retrospective 9: A transformation of the interior restores the dignity and curtilage of the old structure.

In that vein, Adrian has been working on an innovative module prototype, called the Habipod, a flat pack, pre-fabricated housing unit that meets top environmental standards and is designed to provide a flexible dwelling option. The carbon neutral modules are stylish, quick and easy to construct and could serve as eco resorts, guest housing, holiday homes, urban dwellings, community buildings and affordable housing. Once a project is finished and inhabited, Adrian says he feels a great sense of satisfaction, but as with any art or design that is handed over to others to enjoy, you have to let it go. “Art is never finished, only abandoned”, said Da Vinci, and this is nowhere truer than designing a house or community building – a “living, breathing” space that goes through constant change. It becomes a home to people who fill it with belongings and memories, and may choose at some point to repaint or even, someday, renovate. Adrian is also keen to be involved in community buildings such as kindergartens, child care centres, schools, libraries, aged care facilities and surf clubs. And of course, what kind of architect would he be if he didn’t have plans to for his own home on the Mornington Peninsula? Still, to be involved in the formation of community buildings and other people’s homes, is a rather special privilege. Helping people create a built environment that is a living space for them to enjoy, in harmony with the environment, aesthetically and functionally. This is the foundation of Adrian Bonomi’s work. To contact Adrian Bonomi Architect please p: +614 3331 3505 or email him on adrian@adrianbonomi.com.au or visit his website 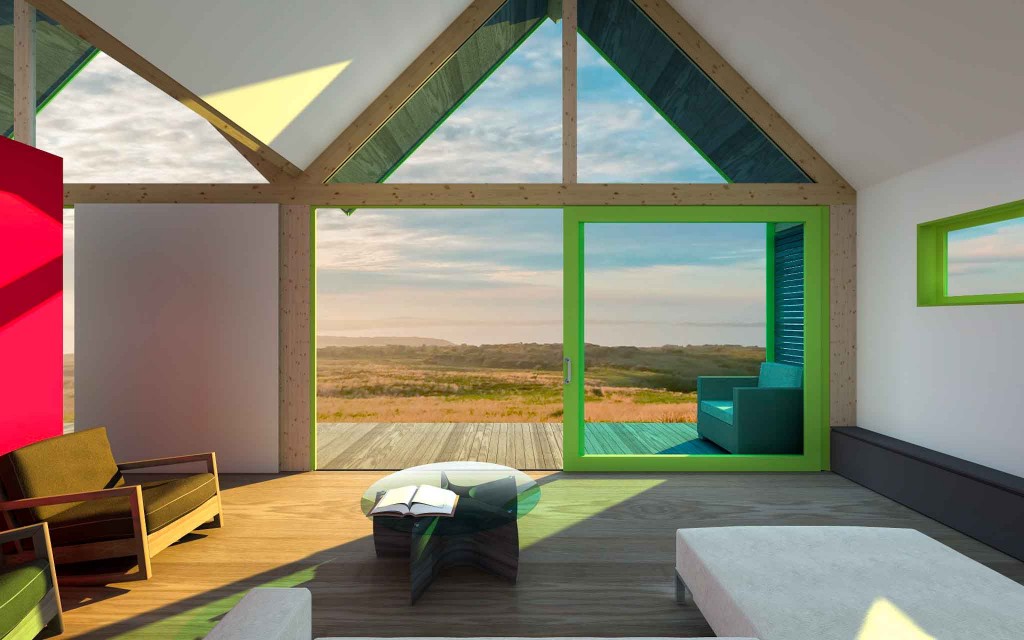 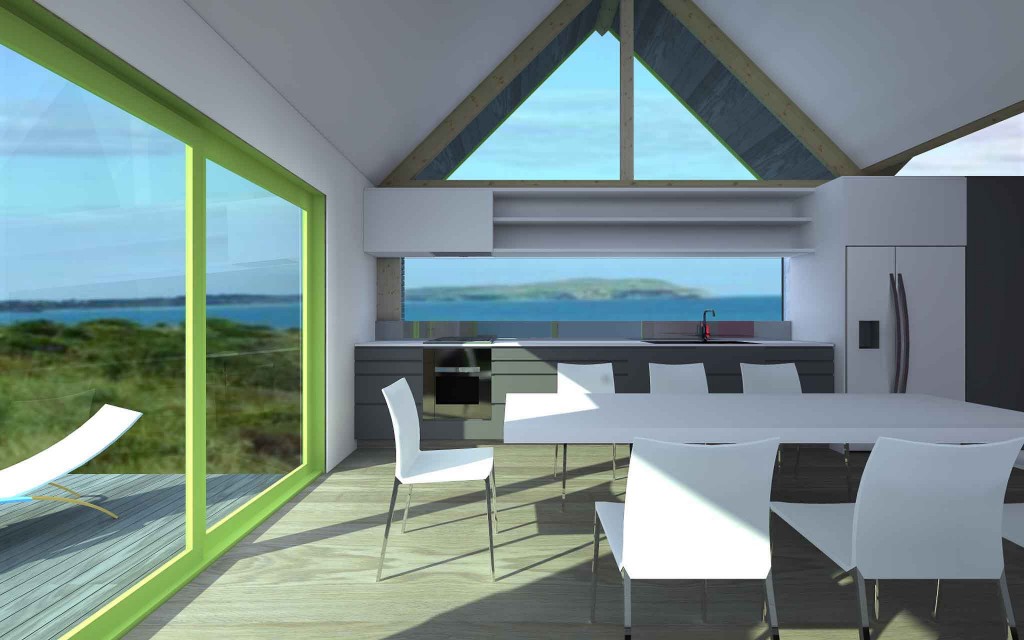 Habipod 2: The environmental standards are pushed to the technical and affordable limits, while energy use is kept to a bare minimum by ensuring the building envelope is tightly sealed and the climate controlled. Clean, fresh air is ensured whilst stale air, allergens and dust is removed constinuously using a low energy air and heat recovery system. Cladding and internal fitout options depend on the site, budget and client preference. Build times are around three to four months depending on the site and options. The result is a dwelling in sync with the landscape.

Paradise at the pier 🙌🏻

With COVID taking most headlines this and last yea

It's been a long winter full of virtual dinners, m

Make the most of your new found freedoms. Carve ou

As pioneers of the gin masterclass @bassandflinder

Anyone else jumping for joy?

Now in its 19th year, the Montalto Sculpture Priz

Can’t wait to get back to exploring the Pen? Us

On the move.. they always have the best views!

Step straight into rural lifestyle on this meticul

It will be a pretty exciting day when the @peninsu